Background. Asthma is a chronic airway disease characterized by episodic symptoms that are associated with functional alterations. It is well known that airways inflammation plays a basic role in the pathogenesis of asthma, and many autoptic and bioptic studies have shown that inflammation involves the entire bronchial tree, from proximal to distal airways. Many studies have demonstrated that inflammatory cells, particularly eosinophils, are well represented in both the inner and the outer layer of the small airway walls, sometimes with a higher density in comparison with large airway walls.

Small airways are the most peripheral airways with an internal diameter < 2 mm and in this zone oxygen and carbon dioxide exchanges take place. The contribution of small airways to the development of the clinical features and functional impairment in asthma is incompletely understood, probably due to the unavailability of definite noninvasive techniques for the study of small airways. Pathological changes in the small airways can be detected by physiological tests. Among these, the single breath nitrogen washout test (SbN2) can be used to evaluate the presence of uneven ventilation. In asthma, In’t Venn showed that airway closure as measured by the single breath nitrogen test, with evaluation of the slope of the phase III and of the closing volume, can discriminate between severe asthmatic patients with and without recurrent exacerbations during clinically stable episodes. This abnormal distribution of alveolar ventilation may result in a ventilation-perfusion (V/Q) ratio imbalance, determining pulmonary gas-exchange abnormalities that may reflect changes in the small airways. It was demonstrated that bronchoconstriction induced by methacoline (with a direct mechanism on smooth muscular cells) or by adenosine-5-monophosphate (with an indirect mechanism determining an inflammatory process) induces pulmonary gas exchange abnormalities as assessed by V/Q ratio. Interestingly, after inhaled salbutamol, which acts mainly on proximal airways, these disturbances persisted. Other indices of abnormal distribution of ventilation (like those derived from multiple-breath nitrogen washout technique or impulse oscillometry) have been used to assess small airway involvement, with some positive results in terms of either a distinction between symptomatic vs non symptomatic patients or a correlation with other functional or inflammatory markers of airway involvement.

Some biomarkers have been studied to detect small airway inflammation in asthma. Fractional exhaled nitric oxide (eNO50) is currently the most widely used biomarker in the exhaled breath and it is often increased in asthma, even in mild and asymptomatic condition. This measure can be done also at different expiratory flows resulting, by a mathematical model, in a measure of alveolar nitric oxide concentration (CalvNO) and bronchial nitric oxide flux (JawNO). CalvNO has been considered as a marker of eosinophilic inflammation involving small airways, and some papers have shown that this measurement, but not eNO50, may distinguish controlled from uncontrolled asthmatics.

It is known that there are asthmatics with the same level of functional impairment of large airways as assessed by FEV1, but with different clinical control of disease, in terms of symptoms and exacerbations. Among the many possible explanations, it has been postulated that this different asthma control might be due to a different involvement of the peripheral airways. However, it is not clear if the pathology of small airways represents a different phenotype of asthma or if it represents just a marker of greater severity of the disease.

Aim of our research project: to test if small airways dysfunction, as assessed by some functional and biological findings, may distinguish asthmatic patients with different levels of asthma control.

Preliminary results. We selected a homogeneous group of patients under regular treatment, and we compared markers of involvement of large (FEV1, sputum eosinophils) and small airways (single-breath test, alveolar-arterial differences of oxygen and carbon dioxide, eNO) between patients with controlled and uncontrolled asthma as assessed by GINA guidelines. Our hypothesis was that markers of small airway involvement may distinguish better than markers of large airway involvement uncontrolled asthmatics from controlled asthmatics. In this attempt, 31 asthmatic patients regularly treated with ICS/LABA were evaluated for the level of asthma control according to GINA guidelines (19), by a 4-week period of diary card and peak expiratory flow (PEF) monitoring, FEV1 and exacerbation rate; sputum eosinophils and fractional ex- haled nitric oxide (eNO50) were also measured. Small airway involvement was assessed by single breath nitrogen washout (CV, ∆N2%), alveolar-arterial O2 and arterial- alveolar CO2 gradients (AaDO2, aADCO2), and alveolar concentra- tion of nitric oxide (CalvNO) (20,21). According to GINA guidelines, patients were defined as well controlled (N=10), partly controlled (N=11) and not controlled (N=10). Analysis and monitoring of PEF and symptoms for four weeks confirmed the different level of asthma control. No significant difference was observed among the three groups as regards markers of small airway involvement, as well as for biomarkers. When well controlled and partly controlled were considered together, not controlled patients showed a significantly higher AaDO2. No significant difference was still observed between these two categories as regards othermarkers of small airway involvement (mid-expiratory flow, single breath analysis, fractional eNO). A significant correlation was observed between AaDO2 and FEV1 %pred, sputum eosinophil percentage, and rescue medication use (Figure 1). There was no significant correlation between different markers of small airways involvement (∆N2, AaDO2, CalvNO). Small airway involvement as as- sessed by AaDO2 may be observed in clinically not controlled moder- ate-severe asthmatics under ICS/LABA combination treatment, despite a not significant difference in FEV1 and in airway biomarkers. Because AaDO2 is an indirect measurement of the ventilation/perfusion (V/Q) inequality related to an heterogeneous peripher- al distribution of the alveolar ventilation, this observation supports the hypothesis that involvement of small airways is associated with poor asthma control. Small airway dysfunction in asthma is well known to marginally contribute to the total airway resistance, while it strongly influences the peripheral distribution of the ventilation and the efficiency of the gas exchange. The evaluations of the alveolar-arterial and arterial- alveolar gradients of oxygen and carbon dioxide has been used several years ago to detect and quantify the abnormal V/Q ratio in patients with asthma or chronic obstructive pulmonary disease (COPD) showing that these mea- surements were frequently abnormal despite mildly reduced or normal FEV1 values (22). Only few authors have evaluated the sensitivity of AaDO2 in detecting functional abnormalities in gas exchange, in comparison with other methods commonly used for studying the abnormalities in the ventilation/perfusion ratio (23); in these cases, AaDO2 significantly increased after bronchial challenge also in presence of mild non significant diseases alveolar gradients of oxygen and carbon monoxide may be representative of the abnormal distribution of the convective ventilation due to some heterogeneity in the small airway involvement.

According to our data, we suggest that the measurement of the alveolar-arterial gradients of oxygen and carbon dioxide may represent a new test for the assessment of small airways involvement in asthma, maybe more sensitive than other traditional measurements. 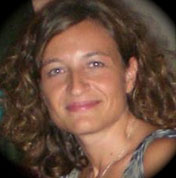 Laura Malagrinò, obtained her Medical degree at the University of Pisa on Jan 2005 and the PG Diploma of Respiratory diseases at the University of Pisa in 2008. In December 2012 she also obtained a PhD in Physiopathology and Clinic of Cardiovascular and Respiratory Diseases at the University of Pisa, discussing a thesis on “Markers of small airways involvement and asthma control in moderate-to-severe asthmatic patients”.
Since January 2012 to November 2012 was holder of a research grant on “Role of flow-limitation in the phenotyping of COPD patients”. Currently she is holder of a research grant on “Tele-care and prevention of exacerbations of COPD”.
She is author and co-author in 10 scientific papers and several abstracts presented in national and international congresses.